As the employer, you must pay the Skilling Australians Fund (SAF) levy. You must not pass the levy on to the visa applicant. The purpose of the levy is for employers to contribute to the broader skills development of Australians.

Who will be affected?

The Migration Amendment (Skilling Australians Fund) Bill, passed by the Parliament of Australia, was implemented on 12th August 2018.  Employer sponsored applications will incur the new training levy from this date.

The levy will replace the current training benchmarks for employers sponsoring workers on 457, ENS and RSMS visas from March 2018. It will also be the requirement for the new TSS visa.

It is important to note that companies employing someone on a sc457 visa are required to meet their Training Benchmark obligations until 12 August 2018.

Is my business eligible to sponsor under the TSS 482 visa program?

REFUNDS OF THE SAF LEVY

Refunds are generally not available for the Levy paid for TSS nominations, however it is possible under the following:

There will be no refund if the nomination is withdrawn or refused. 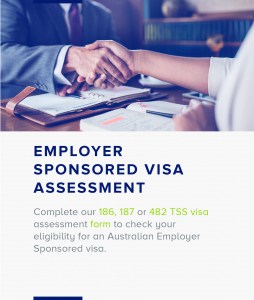