You are here: Home1 / News2 / Why Study in Australia

Why Study in Australia?

10 REASONS TO STUDY IN AUSTRALIA

Did you know Australia has the third highest number of international students in the world behind only the United Kingdom and the United States despite having a population of only 23 million? This isn’t surprising when you consider Australia has seven of the top 100 universities in the world! In fact, with over 22,000 courses across 1,100 institutions, Australia sits above the likes of Germany, the Netherlands and Japan, ranking eighth in the Universitas 2012 U21 Ranking of National Higher Education Systems.

These are strong academic credentials, but our institutions are just as highly rated as the cities that house them around the country. Australia has five of the 30 best cities in the world for students based on student mix, affordability, quality of life, and employer activity – all important elements for students when choosing the best study destination. And with more than A$200 million provided by the Australian Government each year in international scholarships, we’re making it easier for you to come and experience the difference an Australian education can make to your future career opportunities.

Do you have a specific study area of interest? There is every chance Australia has you covered, with at least one Australian university in the top 50 worldwide across the study areas of Natural Sciences & Mathematics, Life & Agricultural Sciences, Clinical Medicine & Pharmacy, and Physics.

Given this impressive education pedigree, it’s not surprising there are now more than 2.5 million former international students who have gone on to make a difference after studying in Australia. Some of these students are among the world’s finest minds. In fact, Australia has produced 15 Nobel prize laureates and every day over 1 billion people around the world rely on Australian discoveries and innovations – including penicillin, IVF, ultrasound, Wi-Fi, the Bionic Ear, cervical cancer vaccine and Black Box Flight Recorders – to make their lives, and the lives of others, better.

Why wouldn’t you want to study with some of the best minds in the world?

Australia is recognized as a great place to live – but did you know Australia also offers a world class education? The Australian education system has produced scientists, designers, educators, entrepreneurs, artists and humanitarians who have changed the world, winning awards from Oscars to Nobel prizes. Their global achievements include the “black box” now on every airplane, the Earth hour initiative, and the invention of Wi-Fi. Australia is proud of the individuals who have studied and worked in Australia (whether they were born here or another country) and gone on to achieve great things and contribute to making the world a better place.

By studying in Australia, you will receive a qualification that’s recognised and sought after around the world. The Australian Qualifications Framework (AQF) allows students to easily move through the education system here and provides an easy way for countries around the world to recognise your qualification, and issue the comparable qualifications for local use. Visit the AQF(opens in a new window) website for more information.

For over 20 years Australia has led the world in putting in place systems and processes to ensure that international students receive the high quality education they expect. These measures include:

In 2012, the Australian Government, in collaboration with peak education bodies and state/territory government education departments, conducted a survey of current international students to obtain information about their living and learning experience in Australia. The key findings of the survey included:

By choosing to study in Australia, you will join hundreds of thousands of students from Australian and all over the world – including many from your home country – who are discovering new friends and opportunities in this beautiful country. You will work closely with classmates, researchers, instructors, and other faculty – collaboration is a key part of our students’ successes. And in many cases you can gain practical and hands-on training in the industry in which you are studying. This combination of teamwork, shared learning, and industry focus will provide you with a leading edge for your further studies and career.

With about 50,000 people in higher education organisations involved in R&D, Australia has a strong research and development (R&D) capabilities. The world famous Commonwealth Scientific and Industrial Research Organisation (CSIRO), the biggest government R&D agency in Australia, is one of the world’s largest and most diverse research institutions. It’s is involved in more than 740 research activities with scientific organisations and agencies in more than 80 countries and undertakes research in fields such as health, agribusiness, information technology, manufacturing, sustainable energy, mining and minerals, space, the environment and natural resources.

Australia is known globally as being one of the world’s most diverse and welcoming countries, and it is something for which we take great pride. In fact, of Australia’s 23 million population, almost half (47%) of all Australians were either born overseas or have one parent born overseas. We also know a thing or two about languages, with more than 260 languages spoken in Australian homes: in addition to English, the most common are Mandarin, Italian, Arabic, Cantonese and Greek.

Australia’s diversity and friendly attitude is matched by its economic stability. To date, Australia has experienced more than 20 years of continued economic growth, weathering the 2008 global financial crisis better than most advanced economies. And we are as competitive on the global economic stage as we are in the world’s sporting arenas! Not surprising, with more than 120 certified sports organisations around the country, covering popular activities such as AFL, cricket, football (soccer), rugby league, golf, tennis, netball and hockey to name just a few.

You may not know but Australia is the biggest island in the world, the sixth-biggest country in the world in land area, and the only nation to govern an entire continent. Within our expansive country, there are more than 500 national parks and more than 2,700 conservation areas, ranging from wildlife sanctuaries to Aboriginal reserves. There are also seventeen UNESCO World Heritage sites – more than any other country – including the Great Barrier Reef, Kakadu National Park, Lord Howe Island Group, Tasmanian Wilderness, Fraser Island and the Sydney Opera House.

But many people around the world know Australia for being a beautiful country. We also have world-class infrastructure, with five of the top 40 cities with the best infrastructure in the world. We also have a reputation for building ‘big’ things – over 150 in fact from the Big Banana in New South Wales, to the Big Koala in Victoria, the Big Mango in Queensland, and the Big Ram in Western Australia. It’s worth a trip to see them all!

With all these wonderful attributes around Australia, we have good reason to be happy. So much so, we were recently ranked as the fourth happiest country in the world behind only Norway, Denmark and Sweden.

Why wouldn’t you want to experience the best Australia has to offer?

If you would like to discuss your matter or have questions on the above please book a consultation here.

Why study in Australia 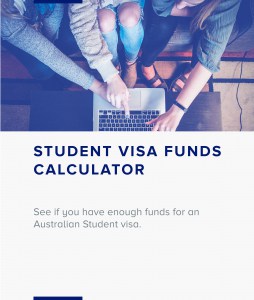 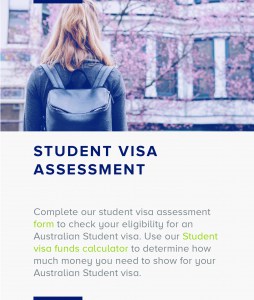