The state nomination requirement in South Australia, as always, is the most complex and difficult to navigate. However, it is also considered an opened and generous skilled migration program in Australia when this state opens its doors to applicants not residing in South Australia as well as offshore applicants.

There are several streams under which you can apply for a state nomination in South Australia, depending on your situation. However, there is a set of common requirements that you need to meet, and we will put these requirements in the simplest way.

We have consolidated the occupation list of South Australia, together with their requirement in a simple way for your reference. You can access the list here.

There are 3 priority streams in the program, and each stream has various categories:

The Talent and Innovators program allows the state to nominate applicants under one of the following five streams.

All occupations eligible for migration through state-nomination are available through the Talent and Innovators program. Successful applicants will demonstrate how they bring new ideas, skills and innovation to South Australia and can create local jobs.

There are concessions and waivers available and eligibility will be primarily dependent on:

The requirement of the 3 categories vary as below

A plus point for this stream is that you do not need to work in your nominated occupation, however, the experience you have must be at skill level 1, 2 or 3. Lower skill level occupations such as cleaners, drivers, kitchenhands are not eligible.

To be eligible for the International Graduate of South Australia (SA Graduate) pathway, the following requirements apply:

Waivers to the skilled work experience requirements are available for selected SA graduates if you apply through the Talent and Innovators program – high performing graduate stream. 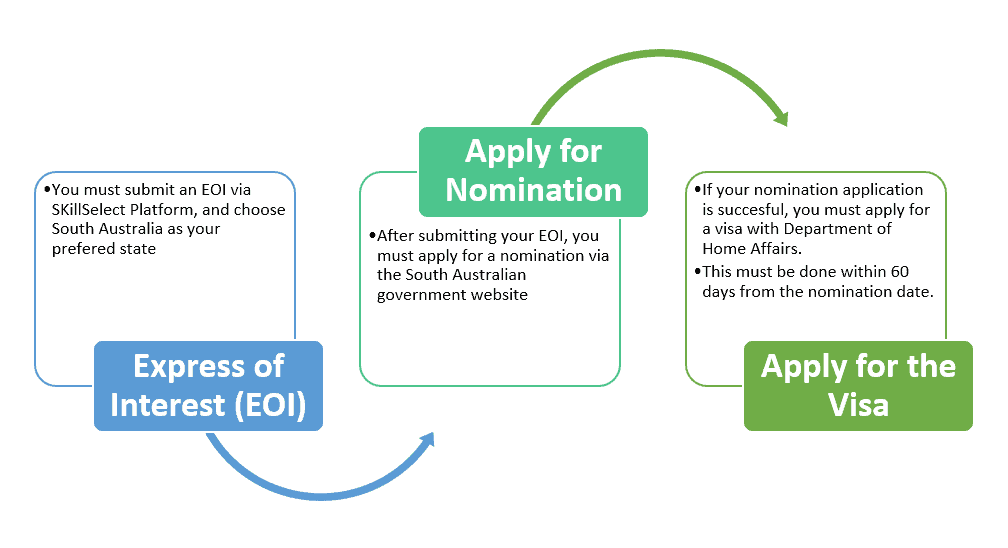 The minimum requirements for state nomination include at least 8 years work experience in the occupation or closely related occupation and a proficient plus English level. Full requirements for each occupation will be shown on South Australia’s Skilled Occupation List from 28 September 2021.

For South Australian state nomination, prospective applicants must meet the Department of Home Affairs requirements, state-specific occupation requirements and have skills in an occupation that is available on our Skilled Occupation List. Offshore applicants meeting the minimum published requirements can lodge a Registration of Interest (RoI) from 28 September 2021.

Please note that state nomination is a competitive process.  There is no guarantee of receiving an invitation to apply for state nomination after lodging an RoI, even if the minimum requirements are satisfied. South Australia cannot indicate the likelihood of invitation or answer enquiries on this matter.

Applying for a General Skilled Migration Visa can be confusing as there are small intricacies in migration law. To alleviate your stress and worry about how to apply for the visa, you can book a time with us to help you understand the processes to make sure that you are on the right track.