You are here: Home1 / News2 / July SkillSelect draw sees another 1,000 candidates invited to apply for...

Australia’s SkillSelect system manages the profiles of candidates for two of Australia’s skilled visa programs — the 189 and 489 visa.

Candidates are ranked based on a score awarded under SkillSelect’s  Ranking System (EOI) that considers factors such as age, education, skilled work experience, study in Australia and language ability in English.

A set number of the highest-ranked candidates receive an invitation to apply for Australian permanent residence, through regular draws from the pool, the Department of Home Affairs aims to process applications for permanent residence within 8 months.

The table below shows the number of invitations issued in the SkillSelect invitation round on 11 July 2019.

During 2019-20 program year the following numbers of invitations have been issued:

The following graph shows the points for clients who were invited to apply in the 11 July 2019 round. 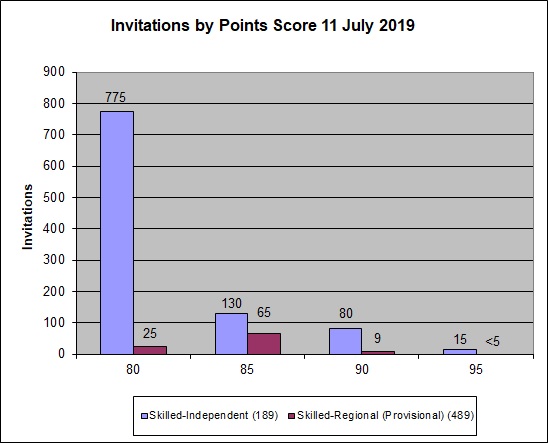 The highest ranked clients by points score are invited to apply for the relevant visa. For clients who have equal points scores, the time at which they reached their points score for that subclass (referred to as the date of effect) determines their order of invitation. Expressions of Interest with earlier dates of effect are invited before later dates.

Point scores and the dates of effect cut off for the pro rata occupations in the 11 July 2019 invitation round.

Due to high levels of demand, and in keeping with previous years, the below occupation groups will be subject to pro rata arrangements to ensure availability of invitations across the program year.